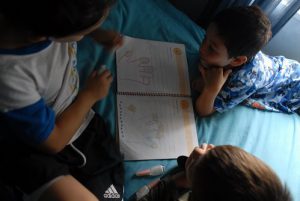 In early 1999, two children who were in a situation of tension with his parents, both parents with mental illnesses. The judge had ruled the removal of the children’s custody.

Rabbi Tzvi Grunblatt, Director of Jabad Argentina, appeared before the Judge proposing that the Community will be responsible for the situation of children. The judge changed his ruling and allowed the children to live with their mother. It was then when Jabad was assigned a social worker who aimed to work with the mother so that she could responsibly assume her role, encouraging other kinds of connection between her and her children, ensure and restore the rights of each of the children so that they could achieve a good quality of life within their family and community relationships.

A few days later, the social worker of a Court called Jabad regarding an 11 years old Jewish boy who was a boarder at the Institute for Children, and had been stoned by other kids for being Jewish. For four months, the professional had been looking for a response from the Jewish community to take him out of the Institute, but the Jewish community did not have any programs for child victims of family violence.

After seeing this predisposition and action, the Judge by then, and later named Child Advocate of the Court of Appeals, Dr. Alejandro Molina, asked the Rabbi if he would receive the Jewish children at risk that they attended in their courts, to which, of course, the Rabbi agreed without hesitation. What he never imagined is that there would be so many.

That’s how Ieladeinu was born.